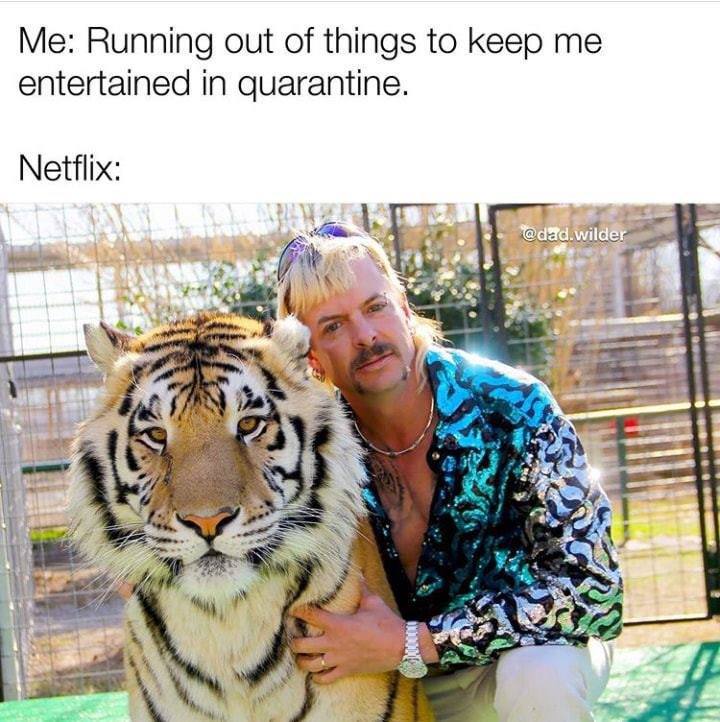 Tiger King and Charismatic Megafauna in Captivity: An Animal-Rights Perspective of a Pandemic Phenomenon

In the midst of worldwide Covid-19 isolation, Netflix dropped a limited series which has gripped the imagination of many: Tiger King: Murder, Mayhem and Madness. The titular ‘Tiger King’, Joe Exotic has become a polarizing and popular figure on the memescape of Instagram in the week since the show aired, with some laughing at Exotic’s Oklahomian hillbilly antics, while others vehemently support his hatred of Carole Baskin, founder of Big Cat Rescue in Florida. Carole Baskin’s attempts to pass legislation preventing the private ownership of big cats in the USA made her the target of an assasination attempt by Exotic in 2017, as well as being accused of killing her missing ex-husband and feeding him to the tigers at her rescue. Several videos from Exotic’s social media are shown throughout the series, featuring Exotic blowing up and shooting mannequins dressed up as Baskin. While this series provides ample stuff for analyses of human marginalisation (how misogyny fuels much of both Exotic’s and the internet’s hatred for Baskin, for example, or how a zoo-keeper is described using the incorrect pronouns throughout the series, or that a principal member of the cast, Rick Kirkham, has since been accused of sexual assault, or even a class analysis of how Exotic and his zoo-keeper misfit workers and teenage boyfriends become hilarious objects of derision) I began to wonder; what about the tigers?

The animals kept at Exotic’s G.W. Zoo and other private zoos are mostly used as backgrounds by the producers of this series. When the animals are discussed, they are simultaneously presented as both victims of abuse themselves and as the agents by which Exotic and other zoo owners are able to abuse workers and sexually coerce teenagers. At times the animals are shown to have agency – one tiger damages a keeper’s hand so badly that it is amputated – however most go unintroduced as individuals, instead only featuring as objects that the (human) stars of the show interact with. The animals are described in purely financial terms, with the focus being on how much money can be made from them versus how much they cost to keep. Ominous reports of big cats being ‘euthanised’ when they grow too old to be handled (over 12 weeks) are discussed briefly, while other animals shown to be sold illegally to exotic animal keepers all over the United States. Concerns about animal welfare are sidelined by the focus on the bizarre battle between Joe Exotic and Carole Baskin, framing the animal’s welfare as unimportant in comparison. When animal abuse is highlighted, it is weaponised to attempt to discredit the various members of the cast; Joe Exotic, Bhagavan Antle, and yes, even ‘animal-rights person’ Carole Baskin are shown to have engaged in some pretty messed up animal abuse throughout the series. All three have advocated at some point in their careers for removing tiger cubs from their parents on the day of their birth: Exotic is shown pulling a new-born cub through cage wire as the mother gives birth to another cub in one particularly heart-wrenching scene. The most overlooked and forgotten animals in this show are the ones who are fed to the big cats, whose worth is literally reduced to whether their butchered parts will feed the captive tigers, lions, and hybrids.

Perhaps the most thought-provoking comment in regards to the imprisoning of wild animals comes from Wildlife in Need’s Tim Stark (WiN is currently under investigation by Indiana officials for endangering staff, by the way): he states that if we want to save endangered species, we should be breeding them as much as possible. Stark is right – if we want to ‘save’ species purely for the sake of them continuing to exist, maybe backyard tiger breeding isn’t such a bad idea. This is the conservation-heavy rationale which keeps zoos in business; as they breed wild animals who will never know what it is to be wild, they convince their visitors that their work is vital to prevent species extinction. While some zoos are more visually attractive than the run-down, barren G. W. Zoo, they are essentially the same; animals are born and die in captivity, and many are removed from their home and family to be traded around the world.

A few weeks before Tiger King aired, at the beginning of the USA’s Covid-19 isolation period, an adorable video made the rounds on social media: some penguins at Chicago’s Shedd Aquarium were wandering the halls of the closed facility, greeting fish and beluga whales. This was described as an attempt by keepers to ‘enrich’ the penguins’ lives while the aquarium was closed. On the Shedd Aquarium website both African penguins and belugas are positioned as endangered and in need of help, which this aquarium is providing. How paying to swim with captive belugas (one of the products Shedd Aquarium offers) will help the plight of wild belugas is not exactly clear, but the captive breeding programmes of this facility and other zoos go on unimpeded, presumably with the support of most of society. The feedback to the viral video of penguins wandering the empty aquarium was certainly overwhelmingly positive.

If viewers are concerned by the treatment of the animals in Joe Exotic’s care, it is to be hoped that they will also think of captive animals elsewhere. Perhaps being constrained by pandemic isolation procedures will encourage some to think empathetically of the animals in zoos, for whom every hour is regulated by someone other than themselves. In the last episode of Tiger King ex-zoo-keeper Saff states that throughout the legal battles between Exotic and Baskin, not a single animal was helped; hopefully a positive outcome of this series will be that we begin to think critically about captive animals in all zoos.

A version of this article appeared on the SAFE website.

C.L. Wilson is a PhD student at the New Zealand Centre for Human-Animal Studies. Their key areas of study are gender and animal advocacy, but they are also interested in pop culture and how it informs social norms. They live with many rescue animals including Trotsky, a big pink pig with a sassy attitude.