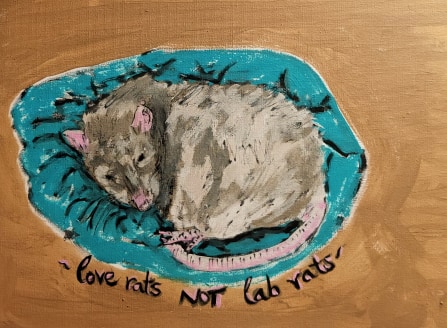 Now more than ever we are getting a glimpse at how our relationships with animals are bound by risk assessments and capitalist logics. Each and every day we awake to new reports of unimaginable harm being inflicted on human and nonhuman animals that share the common backdrop of colonial white supremacist logic that renders certain beings disposable in the time of Covid-19. Whether that be the forced migrant labourers in North American farms and slaughterhouses being exempt from two-week travel quarantine or absolved from the two-meter social distancing mandate, or the looming threat from the Director Verena Kaspari of Neumünster Zoo stating her zoo’s survival may rely on “feed[ing] some animals to others”.

The global situation we find ourselves in is pushing people into places where confinement and social isolation become temporarily normalized. The isolation and quarantine status that defines our near-futures has provided a rupture in our daily lives, allowing our attention to dwell on the conditions in place for Covid-19 to exist, such as the endless networks of risky transmission and interdependencies that bind nation-states and individuals together, relations that cannot be transposed by the naive and sinophobic hashtag #boycottchina.

We have always been unknowingly participating in this world.

As the origin story of Covid-19 tightens around China and the nation’s wildlife farms and markets, global citizens have applauded the February 24th, 2020 announcement on the ban on wildlife markets and consumption within China. However, an unwavering criticism has been issued by the most supportive nation-state for a ban on wildlife markets, the United States of America.

To make sense of this incongruence we have to look at the deep interdependencies between nation-states. Until recently, China was the leading exporter of monkeys, representing an estimated 80% of monkeys imported into the United States. As each day more lives are taken, the restricted access to China’s primate population has been considered a strategic move to benefit its own as speculated in the words of Kirk Leech, the executive director of the European Animal Research Association statement. Unsettling, this declaration comes from a recent report by the Wall Street Journal citing rumors have surfaced that China is offering tax exemptions for corporations to return to exporting wildlife, providing a glimpse into the inner workings of wildlife consumption that geographer Rebecca Wing Yee Wong’s research has interrogated in her book The Illegal Wildlife Trade in China: Understanding The Distribution Networks (2019).

A recent study by Jianzhong Shi and colleagues conducted experiments reviewing the susceptibility of animals to SARS-CoV-2. The study included cats, and dogs (companion animals, test models), pigs, ducks, and chickens (food animals), and ferrets (test models) to determine potential animal models and the lesser discussed but flagged the issue of animal management regarding companion and consumed animals (Shi et al. 2020). Their study confirmed that the farmed species are not a vector, nor are our companion animals, albeit ferrets and cats pass the test rendering them as animals to be researched on. Simultaneously, reports of research laboratories across North American universities are accumulating testimonies of researchers having to euthanize, or in the more accurate words of Leslie Bisgould, “kill”. To ‘kill’ troubles our understanding of ending a life in the individual’s own interest as euthanasia implies in an effort to show the overriding calculations of externalized costs and care practice.

In Canada, an estimated 4.3 million individual animals are non-consensually forced into animal research projects annually, a fight that the Canadian Centre for Alternatives to Animal Methods (CCAAM) has taken on considering 95% of experimental treatments that work in animals fail in human clinical trials. So, what is happening to the 4.3 million individual animals held captive in Canadian university research laboratories and beyond? The Canadian Council of Animal Care has provided a few ambiguous updates regarding the impact of Covid-19 on individuals lives, and is asking researchers to self-report in the Animal Numbers Tracking Form the number of animals euthanized, or killed during COVID-19 with the reminder that “all euthanasia must comply with ACC-approved standard operating procedures”.

The core premise of animal research is that animals’ deaths are given purpose in a laboratory setting whether that be for indoctrinating the new generation of scientists in the method of animal experimentation, which is upheld as “part-and-parcel of this larger moral project to save human patients’ lives or, at the very least, reduce their suffering” (Sharp, 2018, 113). The individual animals become a collective of “multiple copies” or “generic” material that “together effectively erase an animal’s uniqueness or individuality” (Sharp, 2019, 113).

But we must resist this erasure, the collapse of life that Covid-19 is claiming as it kills the most vulnerable people and animals in society without question.

Perhaps instead we need to ask, what are the conditions that were in place that made them most susceptible to Covid-19 among other human-constructed disasters?

In a recent virtual workshop hosted by the American Association of Geographers on Wildlife and Covid-19, Dr. Rosemary Collard ruminates on possibilities of considering animals in laboratories as front-line workers just like the human care workers who are finally, yet with many challenges and tensions, acknowledged and appreciated. Kendra Coulter’s hesitation to think of laboratory animals as workers comes to mind as laboratory “animals are not to complete tasks, but rather are to be the physical recipient of tests” (2016, 92). As Collard quotes Wendy Brown, perhaps it is an “untimely critique” of animal experimentation and our relationships to the nonhuman world as we place all of our trust into pre-existing infrastructures of care such as the modern medical system to return us to life before Covid-19. Arundhati Roy graciously offers, in her forthcoming essay, the Pandemic is a Portal: “But the rupture exists. And in the midst of this terrible despair, it offers us a chance to rethink the doomsday machine we have built for ourselves. Nothing could be worse than a return to normality. Historically, pandemics have forced humans to break with the past and imagine their world anew. This one is no different. It is a portal, a gateway between one world and the next” (2020).

Roy makes us confront what is at stake.

The dangerous intimacies we have struck with nonhuman animals such as the encroachment on their lands, whether that be in the bat caves of China or the lives we have forced on lab and farmed animals captive in geographies of human exceptionalism, the multispecies vulnerabilities of exploitation cannot continue to be taken lightly nor can life be collapsed into statistics.

I end this post by encouraging readers to write to the universities in their cities and ask them about their “Covid-19 Emergency Response Plan” for animals and human workers. It does not take much, and a collegial non-imposing email of fewer words will have greater impact than the email you would want to write. It is an action within our current grips that speaks to our refusal to return to relations of needless exploitation. If we instigate this in all of our practices, we have a chance that the pandemic is a portal to a world that is much kinder to all beings.

Stephanie Eccles is a PhD activist-student at Concordia University. She is committed to understanding contested relations between humans and non-human animals whether that be pitbull-type dogs or farmed animals. Currently, Stephanie is working on a project that examines disaster management plans and farmed animals during Hurricane Florence. Stephanie is a co-editor of A Historical Scholarly Collection of Writings on the Earth Liberation Front (2019). She can be found on her Facebook, Twitter, or website.

Artwork: Heather Fraser. In memory of Ro whose stubborn willfulness made the lives of Nik and her family all the brighter for a short time.

One thought on “Imagining Something More During and After Covid-19: Our Bounded Relations by Stephanie Eccles”